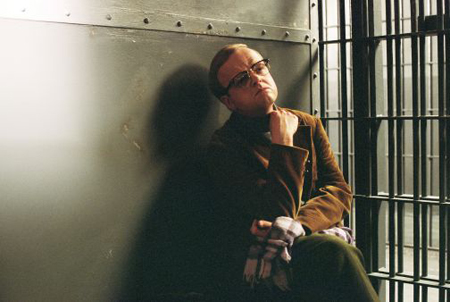 Directed and written by Douglas McGrath 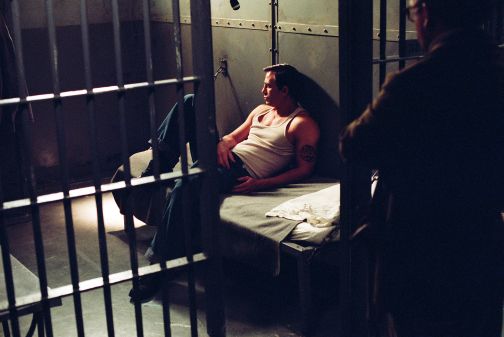 Two recent features about Truman Capote, coincidentally made around the same time, concentrate on Capote’s work on his true-crime best seller In Cold Blood, about the slaying of a family in rural Kansas. Both suggest that Capote’s life and career were destroyed by the emotional strain of researching and writing that book, yet they’re fascinatingly different in what they try to do and in how they depict their subject. Capote – which professes to be based on Gerald Clarke’s standard biography of the same title — came out a year ago and won its lead actor, Philip Seymour Hoffman, an Oscar. Infamous – which claims to be based on George Plimpton’s Truman Capote, a collection of gossipy sound-bites assembled in the same manner as his “oral histories” about Edie Sedgwick and Robert F. Kennedy — was released a year after it was completed to avoid comparisons with Capote. Now that it’s out, comparisons are in order — and not all of them are to Capote‘s advantage. For starters, Hoffman is more multilayered than Toby Jones as Capote, but Daniel Craig is more commanding than Clifton Collins Jr. as Perry Smith, one of the two killers in In Cold Blood. 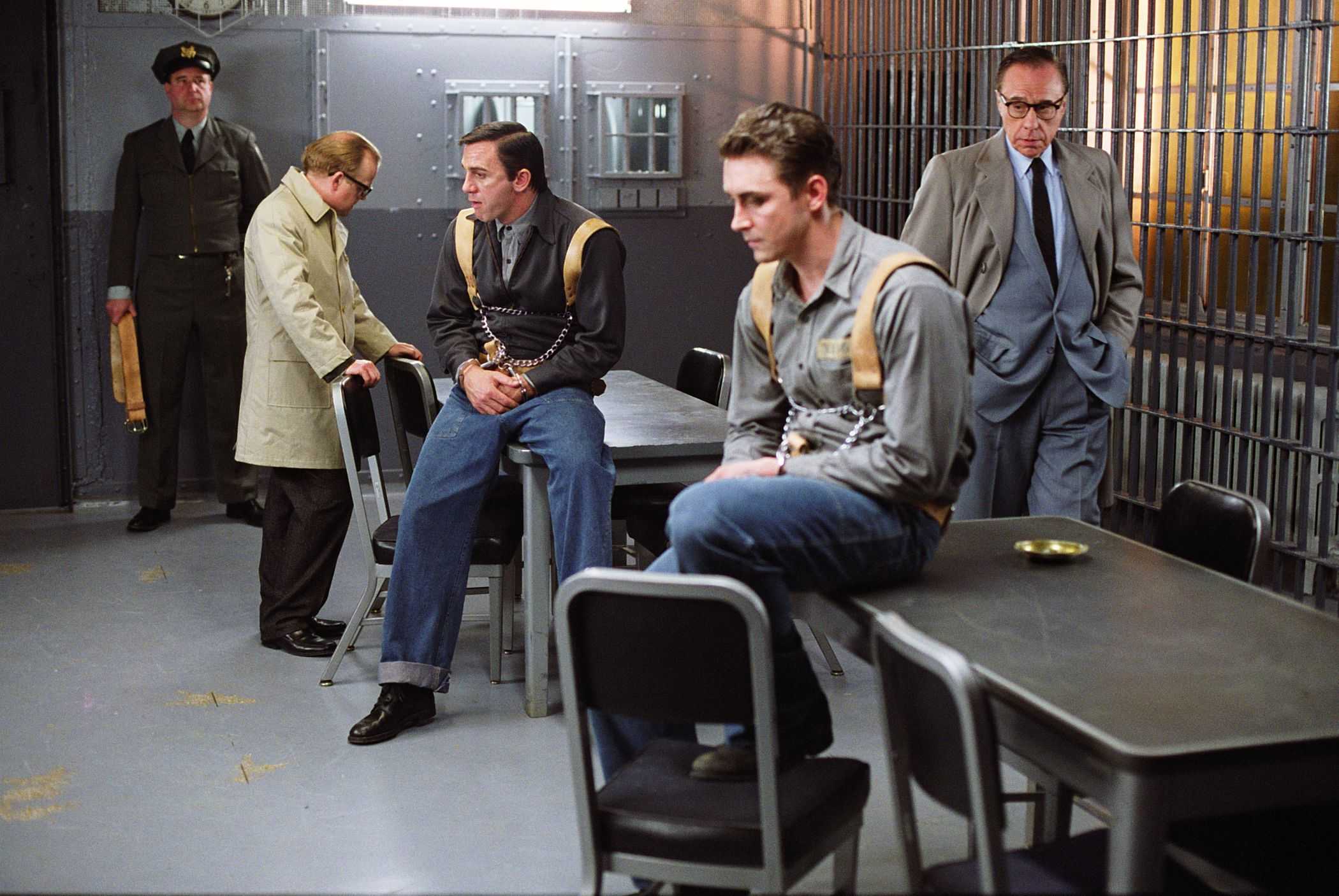 Capote superficially resembles Clarke’s book by proceeding as if it were a biography. Infamous superficially resembles Plimpton’s by including a lot of contradictory dish about Capote, addressed to the camera by actors playing friends and acquaintances, as if at a commemorative cocktail party: Peter Bogdanovich does a funny impersonation of Bennett Cerf, and there’s Sandra Bullock as Harper Lee, Sigourney Weaver as Babe Paley, Juliet Stevenson as Diana Vreeland, Hope Davis as Slim Keith, Jeff Daniels as Alvin Dewey (the Kansas agent in charge of the murder investigation), and other, lesser-known actors as Capote’s live-in lover Jack Dunphy and archenemy Gore Vidal. In the pointless opening sequence, set in a nightclub, Gwyneth Paltrow does an unconvincing Peggy Lee imitation. 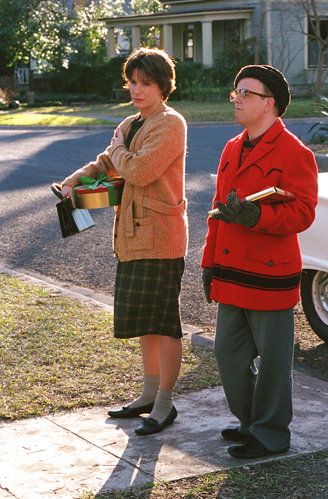 This approach allows Infamous to take liberties when selecting — or in some cases inventing — details, especially when it comes to the relationship between Capote and Smith.

Infamous begins as a comedy about a mannered New York queen who gradually wins over stiff Kansas citizens and a recalcitrant and highly suspicious incarcerated killer (Smith), chiefly by dropping the names of celebrities he knows, like Bogie and Brando. I praised Capote for not making a big deal about Capote being gay, but it’s possible to see some merit in Infamous doing the reverse (though one prominent entertainment-news honcho reportedly complained that Jones’s Capote is “too gay,” which is a bit like complaining that water’s too wet). Capote’s homosexuality becomes most pertinent when the film switches from comedy to tragedy as he and Smith fall in love — an event only speculated about in the Clarke and Plimpton books. The film also gradually develops a multifaceted critique of Capote’s attempts to rationalize his writing a “nonfiction novel,” an effort criticized from the outset by Bullock’s Lee for distorting the truth. Yet the seriousness of this critique is compromised by the film’s use of the same sort of distortions.

Consider the way the two movies handle Smith’s climactic speech about killing Herb Clutter, the head of the slain family in In Cold Blood: “I didn’t want to harm the man. I thought he was a very nice gentleman. Soft-spoken. I thought so right up to the moment I cut his throat.” Capote shows Smith in his prison cell saying this to Capote; Infamous cuts away from this to show Capote later trying out different versions of this speech on his New York friends, finally marking the version he finds works best.

This brief monologue by Smith was one of the two in the book that had the strongest impact on me when I first read it serialized in the New Yorker. The other was Smith’s apology for the murders just before he was executed: “I think it’s a helluva thing to take a life in this manner. I don’t believe in capital punishment, morally or legally. Maybe I had something to contribute, something — ” Then, after a pause: “It would be meaningless to apologize for what I did. Even inappropriate. But I do. I apologize.”

Infamous sets this speech up by showing Capote suggesting to Cerf that an apology would make Smith a sympathetic character, then urging Smith to apologize, saying, ungrammatically, “It restores your humanity to you.” (Characteristically, Infamous shows Cerf accompanying the grief-stricken Capote to Kansas and fielding his incoming calls when Capote has to attend the execution of the two killers. Even more improbably, Capote sends the editor of the New Yorker, William Shawn. In fact, Joe Fox, Capote’s editor at Random House, was the person who went with him, but apparently he wasn’t famous enough to be represented in either movie.)

In Infamous Smith doesn’t deliver his climactic speech; instead Capote lies to a friend about other things Smith said during their last visit, then claims to another friend that Smith made the speech. Then it cuts to investigator Dewey, who says Smith didn’t apologize. “Aha!” I thought. “Capote fooled me.” But later I went back to Clarke’s book, which says Smith delivered the speech just as Capote recounted it, and to Plimpton’s book, which offers several fragmentary accounts, none of which provides evidence that Smith didn’t apologize. Which means writer-director Douglas McGrath denied Smith his final moment of dignity to make some broader comment about Capote being an unreliable journalist. But why lie to tell us Capote lied, especially in an instance when he didn’t?

I can’t deny that Infamous has dramaturgical strengths, whether or not it gets the facts right. Jones’s performance as Capote tends to be delivered in a monotone, yet thanks to Craig all of their scenes together are potently realized. As a statement against capital punishment, the final execution sequence is devastating. And as a portrait of Capote’s New York jet-set milieu, the movie offers loads of cruel fun, though it could have been even more critical. It seems odd that most of these jet-setters, unlike Capote, should be given credence, though this is the kind of laziness Plimpton’s pseudoliterary methodology encourages. (Plimpton’s career as a respectable groupie testifies to the kind of literary prestige money can buy even more than Capote’s did.) Ultimately, as a cautionary tale about fictionalized journalism, it’s a clear case of the pot calling the kettle black. 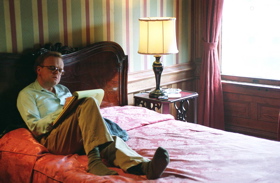