Interactivity as Art and Vice Versa: A BREAD FACTORY

“The justification for [a] pretense to disengagement,” writes Dave Hickey in Air Guitar, “derives from our Victorian habit of marginalizing the experience of art, of treating it as if it were somehow ‘special’—and, lately, as if it were somehow curable. This is a preposterous assumption to make in a culture that is irrevocably saturated with pictures and music, in which every elevator serves as a combination picture gallery and concert hall . . . All we do by ignoring the live effects of art is suppress the fact that these experiences, in one way or another, inform our every waking hour.” 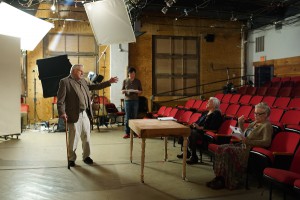 To some extent, Patrick Wang’s dazzling two-part, four-hour comedy A Bread Factory (2018) — shot over twenty-four days in Hudson, New York, after ten days of rehearsal with well over sixty professional or semiprofessional actors — is an epic anthology of performance art, filmed both inside and outside a Hudson art center housed in a former bread factory. What makes it special are the peculiar dots connecting “inside” and “outside.” Inside the eponymous, fictionalized forty-year-old Bread Factory we find theater, film, music, sculpture, and poetry, and inside a trendy, new rival art center with corporate financing is a pseudo-Chinese couple called May Ray doing minimalist, rebus-like performance pieces with prerecorded laughter and applause. Outside is everyday life in Checkford (the thinly veiled Hudson): city council meetings, sessions at the local newsroom, conversations in living rooms, bedrooms, and kitchens, and diverse exchanges at a local café-bar-restaurant. These interactivities, or collisions, between inside and outside, art and mundane events, aren’t simply illustrations of theater as “poor people’s therapy” (as one character puts it) or as vehicles for self-expression. They also serve as modes or models of perception, interpretation, organization, political activism, or simply as reasons for getting together (or not getting together, as sometimes happens). Part one, subtitled “For the Sake of Gold,” sees continuities and harmonies between inside and outside that fulfill Hickey’s notion of the aesthetics of everyday life, rendered mainly in realistic terms about the competitive struggles of Bread Factory and May Ray for a city council grant, and with a happy ending. Part two, subtitled “Walk with Me a While” — which starts with a swiftly mimed recap of part one on stage right while a string quartet plays on stage left and concludes with an unhappy or bittersweet ending, when the city council decision gets reversed — is more concerned with discordances, with singing tourists on the street and tapdancing tech workers in the café. But it also culminates in an abbreviated rendition of the Bread Factory’s production of Euripides’s Hecuba seen being blocked and rehearsed throughout part one, performed now to a disappointingly if foreseeably small audience. As a theater director himself, Wang has focused often on Greek tragedy, and his charting of the various stages (in both senses) of Hecuba moving toward realization, with the fictional director’s partner cast in a leading role, is what has led many critics to compare A Bread Factory, which premiered last autumn, to Jacques Rivette’s L’amour fou (1969) and Out 1 (1971). Perhaps the biggest differences are that Wang has written everything apart from Hecuba, including even the verse in a poetry reading — the only improvised material is gestural, not verbal — and that his Rivettean sense of process is wholly American. 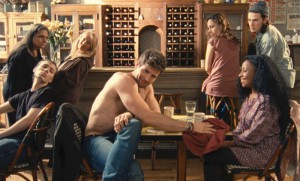 At latest count, thirty-seven rave reviews of A Bread Factory in the US and Europe, many from mainstream outlets, are on the film’s website. Yet it’s a work, however striking and original, that continues to exist below the radar on both continents and in all the disunited states where it periodically continues to surface, media profile be damned. It’s worth adding, however, that Wang, after self-distributing his three features for the past decade and not releasing them on DVD or Blu-Ray (which has contributed to their scarcity), has recently acquired a distributor, Grasshopper Films, which has already offered us digital editions of such irreplaceable items as Chronicle of Anna Magdalena Bach, Vampir-Cuadecuc, Casa de Lava, and Did You Wonder Who Fired the Gun? So it may still be invisible in mainstream terms, but it isn’t going away. 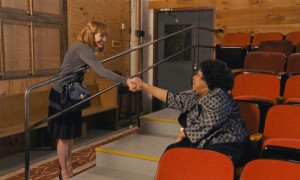 Existing below the radar is largely what A Bread Factory is about, so it’s unsurprising that Wang often chooses to focus on characters who are very old or very young, such as the elderly lesbian couple Dorothea and Greta (beautifully played by Tyne Daly and Elisabeth Henry) who run the center and the little boy Simon (Keaton Nigel Cooke) who serves for a time as its projectionist. It also seems relevant that Wang lives in Manhattan but has chosen to shoot all his features to date in what Manhattan regards as the sticks. (“I have a connection to smaller towns. I once lived in a small town in Argentina as an exchange student, and that was a very formative experience. In dramatic literature, a small town is often the setting because you can show everything going on in that town,” as in Ibsen and Brecht.) Furthermore, to explore the omnipresence and multifunctional purposes of art in a country that fundamentally and passionately hates art — and, as Wang reminded me, has felt this way at least as far back as de Toqueville — necessarily entails working below the radar, which arguably turns out to be the best place to function. 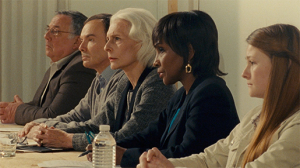 This is a film of appreciation and celebration of both art and everyday life far more than one of complaint. The huge cast challenges us to keep up with the characters, to chart their multiple interconnections, inviting and rewarding return visits to tease out every thread. Even the film’s satirical targets — starting with the hilarious May Ray and their links to big cities and celebrity culture and extending to mobile phones and selfies employed as shields — are approached with head-scratching amusement and bemusement more than bile. And the implicit dialectical conversation between parts one and two about what constitutes realism — such as a local newspaper staffed exclusively by little boys after the editor, Jan (Glynnis O’Connor), mysteriously disappears, leaving behind her teenage protégé Max (Zachary Sayle) to replace her —is an important part of the fun and games. As Wang put it during a Q. and A. I recently conducted at the Gene Siskel Film Center, what matters most to him about May Ray isn’t just their strident silliness (my terms) but the way “they’re turbocharged by capital” — reminding me now, while transcribing that phrase, how my late Chicago colleague Siskel was himself turbocharged by capital far more than he was by cinema. “To communicate between segments of society and to express systems of power, money comes up,” is how Wang puts it. (At M.I.T., he started as a physics major before shifting to economics, and minored in “music and theater arts.”) And regarding the isolations and blocked connections that proliferate in part two, he views the singing and dancing as other forms of communication “that don’t allow for [any] conversation.” Max — who gets a superb lesson in journalistic ethics from Jan after copying phrases from a press release in his review of a May Ray performance — later delivers a harsh autocritique to Sir Walter (the late Brian Murray) in his office after another review causes Ray to get fired (to be replaced by another Ray). But we already know that Sir Walter, an actor himself, still refuses to speak to another local reviewer who gave him a bad notice half a century ago, though he defends Max’s review to Max, in part because he doesn’t regard Ray #1 as an actor at all. 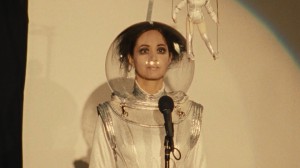 Max is dating Julie (Erica Durham), a cast member of Hecuba. When she runs off with a movie star who turns up to support May Ray getting a grant from the city council and supplanting the Bread Factory, he’s so distraught that he goes to Dorothea for comfort. Dorothea coaxes him into reading the lines of the grief-stricken ghost of Polydorus in Hecuba, not because she necessarily needs him for the part but because she suspects it’s the only way to distance Max from his pain, for him to vent, via another imagination, some of his feelings. It seems to work.

Another performance at the Bread Factory, by Elaine Bromka, is a Chekhov spoof written by Wang years ago that he told me is a parody of what he regards as “Chekhov performance style,” and still another, delivered in the newsroom by Sir Walter, is a more “earnest” pastiche of a Chekhov protégé, Ivan Bunin, linked to literature rather than theater. How do we connect these two monologues to each other, and to everything else? Even if we can’t, or don’t, Yang’s sense of play and his freedom to take risks and the pleasures to be found in what the actors are doing provide ample continuity with everything else, as do all the shifts in acting techniques. What occasionally registers as a hit-or-miss jumble of methodologies and proficiencies, a sort of perpetual tryout, laid back yet ever hopeful, bears more than a passing resemblance to life as it’s routinely lived. 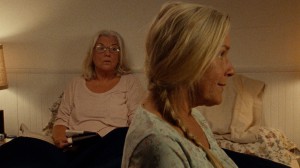 A Bread Factory is currently touring the United States and will play in Jeonju and Taipei next month.