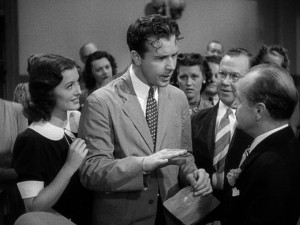 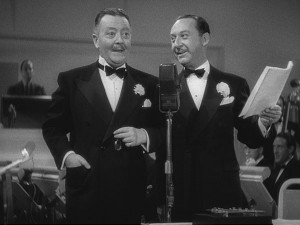 Preston Sturges’s second feature as writer-director (1940, 66 min.) is in many ways the most underrated of his movies — a riotous comedy-satire about capitalism that bites so deep it hurts. An ambitious but impoverished office clerk (Dick Powell) is determined to strike it rich in a contest with a stupid slogan (“If you can’t sleep at night, it isn’t the coffee, it’s the bunk”). He’s tricked by a few of his coworkers into believing that he’s actually won, promptly gets promoted, and proceeds to go on a shopping spree for his neighbors and relatives. Like much of Sturges’s finest work, this captures the mood of the Depression more completely than most 30s pictures, and the brilliantly polyphonic script repeats the hero’s dim-witted slogan so many times that it eventually becomes a kind of crazed tribal incantation. As usual, Sturges’s supporting cast (including Ellen Drew, William Demarest, and Raymond Walburn) is luminous, and he uses it like instruments in a madcap concerto. (JR) 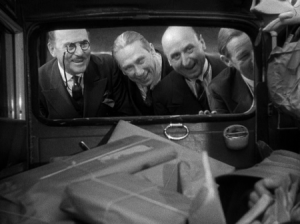