From the Chicago Reader (September 27, 1991). This film is now available on a Criterion Blu-Ray. Although I still have some issues with the film, after reseeing it on this edition, Terry Gilliam’s audio commentary is terrific, and his own enthusiasm for the film is often compelling. — J.R.

Terry Gilliam’s elephantine yet breezy The Fisher King is a gripping new-age extravaganza, visually splendid and adroitly paced. But some gross conceptual cheating — presumably the fallout of commercial ambitions — makes the film a little hard to swallow. Gilliam’s fifth feature (he also directed Jabberwocky, Time Bandits, Brazil, and The Adventures of Baron Munchausen) revels in duality — everything comes in twos — so it’s little wonder it indulges in both duplicity and outright doublethink; the film is also littered with internal “rhymes,” both significant and gratuitous. This duality may come partly from the fact that for the first time Gilliam has not written the script himself — it’s by talented newcomer Richard LaGravenese. At any rate the duality echoes Gilliam’s well-advertised desire to make this both an artistic and commercial success — to prove he can turn out a money-maker (after the box-office flop of Baron Munchausen) and yet retain his reputation as an overachiever in the grand style, a director known for his quirky humor and ravishing visual conceits.

The Fisher King certainly succeeds as grand entertainment, offering three of its leads — Jeff Bridges, Robin Williams, and Mercedes Ruehl — the juiciest parts I can recall them ever having. And all three take full advantage of their opportunities, surprising and delighting us so often that they help us overlook a good bit of what makes this movie objectionable. But Amanda Plummer, though she’s certainly equal to the demands of her part, is assigned a cartoon character, the sort of role Rita Tushingham played in such 60s British movies as The Knack and A Taste of Honey. Lydia is a caricature, someone who never quite becomes a character the way the other leads do, largely because she’s given few chances to interact with them.

How does this movie’s doubling principle operate? For starters, the film centers on two crushed New Yorkers — a brash former radio talk-show host named Jack (Bridges) and a former medieval-history professor now living as a crazed street bum, Parry (Williams). Their lives are derailed by the same tragedy — a mass murder in a yuppie nightclub triggered by Jack’s idle tirade to a radio listener; Parry’s wife is one of the victims. Though the two men are initially strangers, they wind up saving each other’s souls.

Gilliam’s hallmark as a filmmaker is his wanton mixing of the metaphysical and the perfunctory, the ponderous and the silly, so it’s logical that the “rhymes” in the movie come in these varieties.

Ponderous: Just before Jack learns about the tragedy, he’s rehearsing a part in a TV sitcom whose key line is “Forgive me.” Three years later, when he’s a drunken lout shacked up with a loving video-store owner named Anne (Ruehl), he hears a sitcom actor deliver the same line on TV. Silly: The pretragedy Jack has a girlfriend, whom we briefly see drawing a nude male superimposed over a map of the United States so that Florida seems to be the man’s penis. Nearly two hours into the movie, when Parry has his first date with Lydia — a mousy publishing executive with whom he has long been infatuated — he tells her, “I have a hard-on for you the size of Florida.”

Perfunctory: At two separate times in the movie, Lydia accidentally knocks videos and romance novels off their racks, and twice she’s seen grappling helplessly with Chinese dumplings and chopsticks. Metaphysical: Unless my eyes deceived me, the same actor who plays the millionaire owner of a Fifth Avenue town house — Mel Bourne, who happens to be the film’s production designer — also plays one of Parry’s homeless chums. 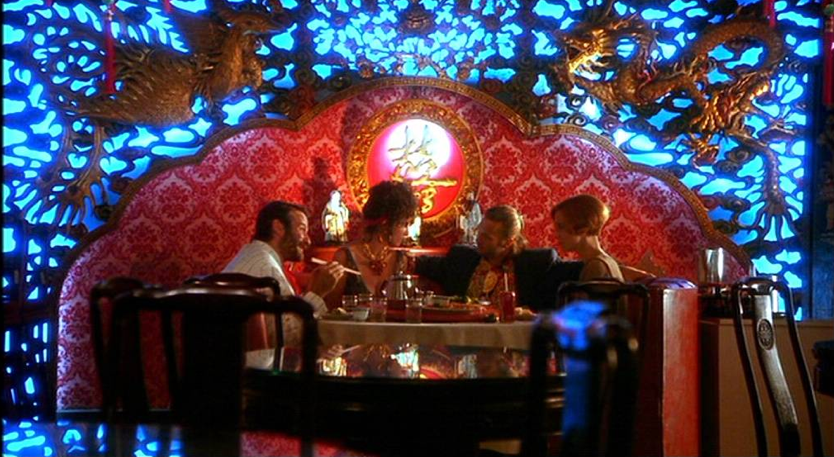 This is no way exhausts the list, but finally there are two scenes that manage to be ponderous, silly, perfunctory, and metaphysical all at once. Twice Parry stretches out buck-naked in Central Park at night — the first time Jack looks on aghast, and the second time Jack happily joins him.

Meshes of the profound and the trivial seem especially appropriate to new-age movies; Field of Dreams and Ghost, for example, both seemed to specialize in them. At its worst “new age” might be seen as the streamlined dregs of 60s spirituality and progressive idealism strained through 70s narcissism and 80s narcolepsy; and at best, as the resurgence of a profound discontent with our physical and spiritual environment that promotes curiosity about history, myth, and other cultures. But if we define the thrust of new age as secularized religion and depoliticized counterculture, then Gilliam probably qualifies as our most gifted movie illustrator of that sensibility. He also comes across as the most deliriously confused. What basically puts this movie across, apart from the pacing, performances, and visual rhetoric, is its treatment of the now-popular new-age theme of Male Sensitivity — notions presumably related to those contained in Robert Bly’s best-seller, Iron John. Because Gilliam is so faithful to this theme, other aspects of the plot are left to fend for themselves, and in the process almost strangle on their own contradictions.

Oscillating almost hysterically between a genuine visionary ambition and the cynical determination to give a nonthinking audience every unreasoning wish fulfillment it desires (and then some), Gilliam exploits, inspires, degrades, and exalts the viewer by turn. To his credit, he never ceases to entertain us; to his discredit, he rarely gives us enough breathing space to figure out whether he’s actually enlightening us or merely picking our pockets while pretending to do so. (Readers who’d prefer to get their pockets picked in innocence are advised to check out of this review now.) 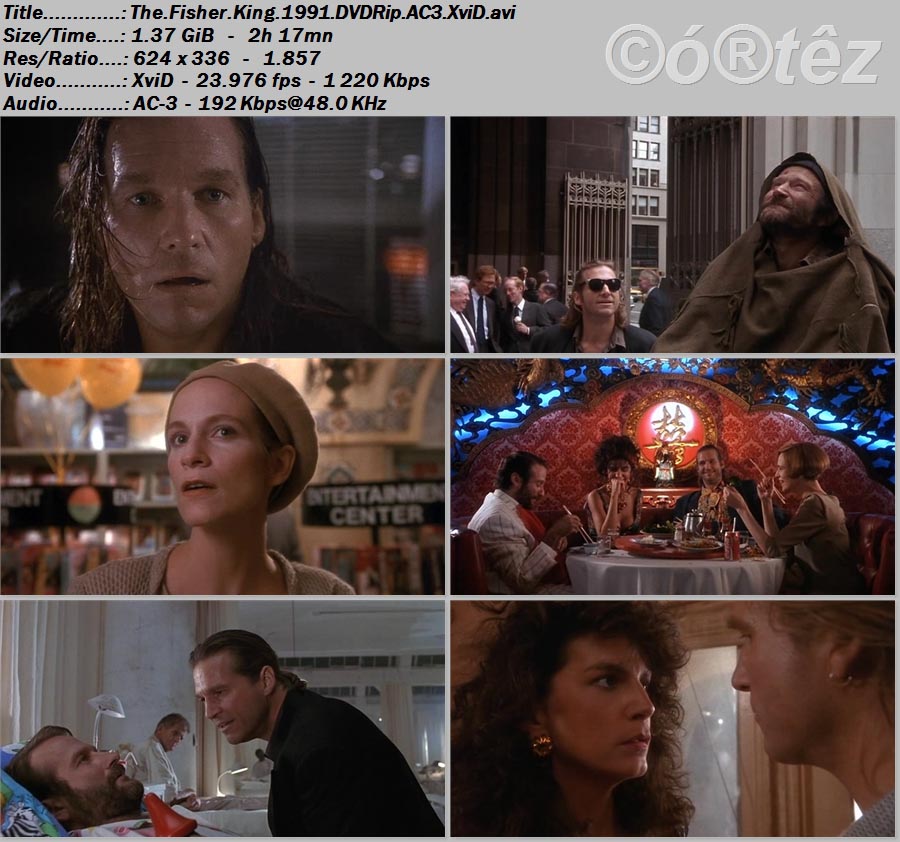 The initial premise of The Fisher King recalls the central idea of Talk Radio: the harangues of a vain, nasty-mouthed disc jockey seem not only to uncover but to provoke his listeners’ desperation and hate-filled insanity. But with the introduction of the second hero, Parry, the film broaches the grander and more universal themes of Cervantes’s Don Quixote. The death of his wife has so traumatized Parry, we discover, that he’s developed the mad conviction he’s a medieval knight: he quests after the Holy Grail (a chalice he locates in a Fifth Avenue town house), gallantly worships Lydia from afar, and heroically protects the innocent and unprotected (including Jack) from scoundrels. We also discover that he’s currently camping out in the dank basement of the apartment house where he and his wife lived when he was still a history professor at Hunter — an arresting potential visual contrast, but we never see the flat he shared with her. Whenever he begins to recall his former identity, his memories are quickly blocked by infernal visions of a menacing, fire-breathing red knight on horseback — a corny, pretentious conceit that the movie trots out at every opportunity.

The Quixote theme is a beautiful and complex one, and there are brief moments — particularly after Jack seems to fall into the role of Sancho Panza, protecting Parry from danger while humoring his delusions — when the movie seems to have stumbled upon a rich vein of poetic tragicomedy. Some of the movie’s most charming moments seem to stem from Parry’s quixotic illusions, such as the conversion of Grand Central Station at rush hour into a ballroom of waltzing commuters. Unfortunately, the filmmakers lose the Quixote theme by thoroughly muddling the film’s notions of illusion and reality — by the end, it’s made to seem that most of Parry’s delusions may be half-true, hence not delusions. And the Fisher King myth that gives the film its title (a fool accidentally finds the Holy Grail the Fisher King has spent his life searching for) is addressed only briefly — its real purpose is to broach issues of male sensitivity and holy innocence, which the film also does not bother to examine.

In my mind, the extent of Don Quixote’s heroism is apparent only when he comes to his senses on his deathbed and renounces his former visions — a moment of gut-wrenching tragedy that transforms Cervantes’s novel into something far beyond barnyard slapstick and interpolated intrigues. Gilliam and LaGravenese ostensibly honor the concept of a deathbed recognition, but their commercial aims scuttle any possibility of real tragedy. Parry ultimately “comes to his senses,” but only in the sense of recalling his wife’s death. And this occurs only because Jack, to save his friend’s life, fulfills Parry’s quest by stealing the “Holy Grail” from the town house. In fact we fleetingly discover that, by burglarizing the house, Jack has unwittingly saved the life of its owner (“Accidental Suicide Thwarted by Midnight Prowler” reads the implausible New York Post headline). Shamelessly the movie hedges its bets, at once shattering and validating Parry’s delusions with a couple of timely miracles.

The double-dealing of the feel-good conclusion goes even further than this. Jack and Parry both start out as successful yuppies and lose their way through the same tragedy — significantly, a tragedy triggered by Jack’s denunciation of the yuppies who frequent the fancy night spot. Jack snarls that these people are incapable of love, that they can only “negotiate ‘love moments’” — a criticism that clearly applies to Jack himself before and after the tragedy. (Whether or not it applied to Parry is left unclear.)

After Jack finds redemption through caring for Parry, he’s primed to become a yuppie again; he calls his agent, then visits a TV producer to discuss appearing in a sitcom about the homeless called Home Free. “It’s a weekly comedy about the homeless but it’s not depressing in any way,” says the producer — the filmmakers’ clear and ironic acknowledgment of the agenda of The Fisher King itself. On his way into the meeting, Jack refuses to notice or help a street person being dragged away by a hostile guard — the same crazed drag queen (Michael Jeter) who had previously been a comrade to him and Parry. Then, in the middle of the producer’s spiel, Jack rushes back down to the street to find his former friend, who by now has disappeared.

Fleetingly — but significantly — this episode acknowledges that Jack’s “redemption” consists mostly of the opportunity to become once again the public scumbag he used to be (when we also saw him blithely ignoring a street person). But having made this point, the movie quickly encourages us to forget it. A far more important part of Jack’s spiritual agenda is finding the ability to tell his girlfriend that he loves her; this noble task makes the issue of whether or not he’s a public scumbag seem secondary. (A hallmark of new-age morality is that personal development is privileged over social conscience: Scorsese’s The Last Temptation of Christ succinctly expresses this philosophy in terms of Jesus’ life.)

The movie similarly clouds what is entailed by Parry’s “redemption” — in this case, a return to relative sanity by acknowledging his wife’s death. Will he go back to teaching history, continue his crazed street life, or devise some unexplained and unimaginable synthesis of the two? It’s essential to the giddy happy ending that we haven’t a clue how either Jack or Parry is going to negotiate his future “love moments.” By this time, within the confines of an ideally pastoral, nonviolent, and empty nighttime Central Park, the rest of the world has helpfully simplified itself into a nonhuman spectacle existing exclusively for the characters’ consumption — and for ours. 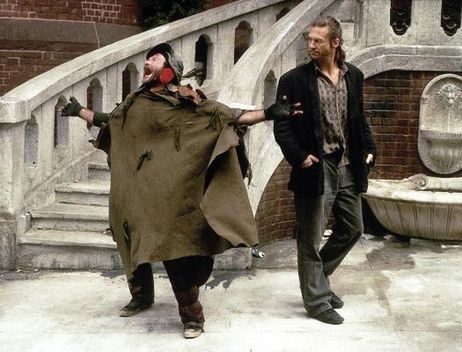