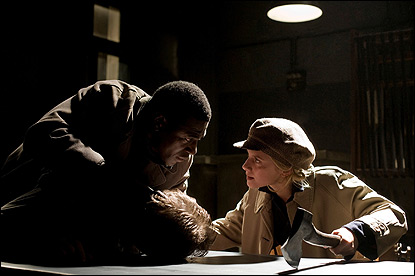 Recommended Reading: “When Jews Attack” by Daniel Mendelsohn, a two-page spread in the August 24 & 31 issue of Newsweek, begins to help me account for what I find so deeply offensive as well as profoundly stupid about Inglourious Basterds [sic sic -- or maybe I should say, sic, sic, sic]. A film that didn’t even entertain me past its opening sequence, and that profoundly bored me during the endlessly protracted build-up to a cellar shoot-out, it also gave me the sort of malaise that made me wonder periodically what it was (and is) about the film that seems morally akin to Holocaust denial, even though it proudly claims to be the opposite of that. It’s more than just the blindness to history that leaks out of every pore in this production (even when it’s being most attentive to period details) or the infantile lust for revenge that’s so obnoxious. When Mendelsohn asks, “Do you really want audiences cheering for a revenge that turns Jews into Nazis, that makes Jews into `sickening’ perpetrators?”, he zeroes in on what’s so vile about this gleeful celebration of savagery. He also clarifies the ugly meaning of Tarantino’s final scene when he points out that Nazis carved Stars of David into the chests of rabbis before killing them — a fact I either hadn’t known before or had somehow managed to suppress.

It’s amazing to me that some fellow Jews who were so indignant about Sophie’s Choice (by which I mean the Styron novel — arguably his best — and not the hollow Pakula movie) can give Tarantino a free ride on this one, presumably under the theory that this boy should be allowed to enjoy every last drop of his all-American fun, even at the expense of real-life Holocaust victims. As far as I’m concerned, whatever Tarantino’s actual or imagined politics might be, he’s become the cinematic equivalent of Sarah Palin, death-panel fantasies and all. [8/17/09]