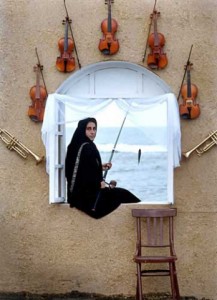 This 1993 film by the eclectic and talented Iranian filmmaker Mohsen Makhmalbaf (The Peddler, Marriage of the Blessed) is a contemporary semitragic farce about a burly film actor who wants to act only in art films but is forced by his family’s economic demands to do a string of trashy commercial movies. His tormented wife, infertile and obsessed with having a baby, insists that her husband marry and impregnate a second wife, a deaf-mute Gypsy, to provide them with a child. What keeps this picture frenetic, apart from the hysterical action and satirical treatment of the Iranian media, is the couple’s surreal, high-tech home and Makhmalbaf’s hyperbolic, eccentric mise en scene, which fit together hand and glove (as they were undoubtedly designed to do). The three lead actors — Akbar Abdi (playing some version of himself), Fatemeh Motamed Aria, and Mahaya Petrossian — were all in Once Upon a Time, Cinema, Makhmalbaf’s previous feature; there appear to be some cross-references (such as the hero’s Chaplin worship), but here the tone is more caustic, the inventiveness more pointed. The meanings of both films are less than entirely clear, but my hunch is that each is a comic allegory about the rift between traditional and contemporary Iran, in which class differences and cultural differences are equally pertinent. (JR)