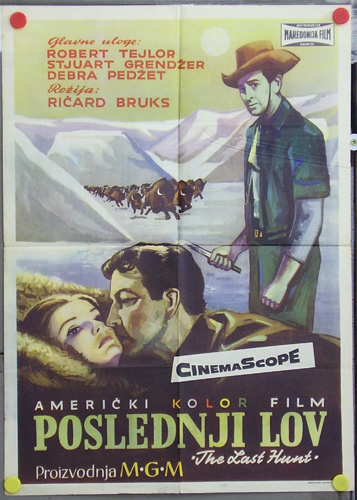 A very dated but absorbing – and, in its own terms, effective – liberal CinemaScope western, all the more interesting for its dated qualities. In anticipation of Jim Jarmusch’s DEAD MAN, an explicit correlation is made between genocide of Native Americans and the decimation of buffalos, personified in this case by a racist and wanton killer played by Robert Taylor -– contrasted with the humane, reluctant buffalo killer played by Stewart Granger, who grew up with Native Americans and respects both them and their own respect for white buffalos, unlike Taylor. Lloyd Nolan plays the Walter Brennan part, a drunken old geezer who also comes along on the last hunt and winds up siding more with the good guys (i.e., everyone except Taylor, a dyed-in the-wool villain throughout).

The politically incorrect monkey wrench tossed into this scheme, at least by today’s standards, is the fact that the two major Native American characters are played by Russ Tamblyn (a half-breed) and Debra Paget, who function as Granger’s son figure and romantic interest, respectively. In short, no real Native Americans to be seen anywhere, making this movie a good target for the kind of conservative, anti-liberal scorn that a critic like Manny Farber might have had towards such a film. You might even say that it isn’t so much about Native Americans as it is about liberal white fantasies about Native Americans, and self-regarding noble attitudes about them. In this respect, at least, the buffalos are treated with a lot more respect, requiring no stand-ins or substitutes. [5/25/08] 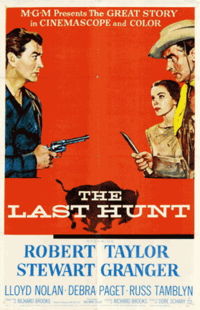