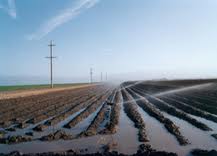 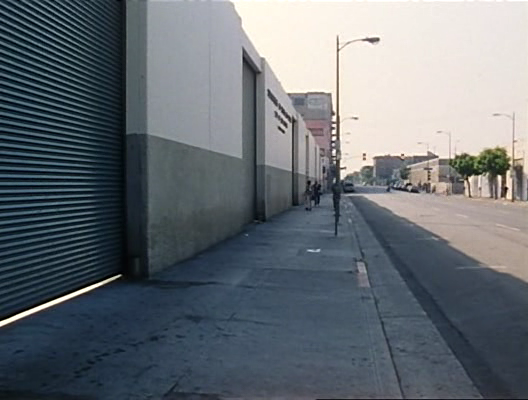 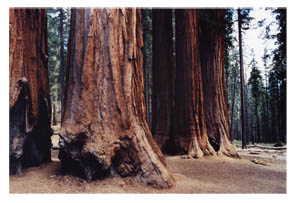 Experimental films usually attempt to rearrange our reflexes along with our expectations. James Benning’s 270-minute, 16-millimeter “California Trilogy” does that in part by obliging us to rethink the way we interpret “directed by” and “written by.” If “directing” refers to the placement of camera and microphone, then Benning — who works alone, recording image and sound by himself — directed these three films. And if “writing” means the choice and identification of subjects — including the way they’re represented in the credits — then Benning is also the trilogy’s writer.

Benning — who will attend the March 21 screening of his film at the Film Center — placed his name at the end of the final credits of El Valley Centro, Los, and Sogobi, the three 90-minute features comprising his trilogy. Each feature consists of 35 shots lasting 150 seconds apiece, followed by final credits also lasting 150 seconds. Thirty-six times two and a half minutes equals an hour and a half; multiply that by three and you get 270 minutes, or four and a half hours. Benning used to teach high school math, and a passion for such neat, symmetrical patterns is central to his work, for better and for worse; he apparently wants to give images, sounds, and certain verbal classifications the uncluttered purity of numbers and mathematical concepts. Countering this rage for neatness is a spirit of adventure and exploration, which inspired him to brave the elements in all sorts of climates and terrains to film 226 shots for the trilogy, 105 of which he used.

Watching symmetrically composed California landscapes for four and a half hours must sound a bit boring. I wasn’t bored, but I can’t deny that I felt frustrated at times. I’m quite capable of nodding off during movies —  even during ones I like — but I can’t recall a single time this happened to me while watching a nonnarrative film, including any of Benning’s (and by now I’ve seen quite a few). The linear thrust of narrative tends to be hypnotic. In contrast, Benning’s movies demand to be read rather than simply followed; you have to walk alongside them and keep them company, so to speak, which generally keeps one alert.

The main thing that frustrates me about “California Trilogy” is that the credits come at the end of each feature. They function a bit like extended cast lists, consisting of 35 separate titles identifying, in order, the 35 shots one has just seen. Each title lists the subject, its owner, and its location. The first shot of El Valley Centro and the last shot of Sogobi, for instance, are both identified as “spillway/Department of Water Resources/Lake Berryessa.” (In the first case the spillway is active, swallowing up water like a sink drain; in the second it’s inactive.)

What’s frustrating about these titles isn’t simply that they appear at the end of each film. (Unlike most spectators, I had a complete list of them, which Benning had sent me in advance, and I periodically consulted it like a program.) I’m more bothered by the conflict in this trilogy (which I find in most of Benning’s work) between a formalist impulse and a sociopolitical impulse — a conflict in which the formalist impulse always wins.

I don’t think Benning views the conflict this way. In a recent interview he described the structure of El Valley Centro – a film I reviewed for the Reader when it premiered in Chicago in 1999 — saying, “I wanted to code and then cause a rereading of the whole film by naming what you see and exposing ownership. Like, you might not know that this was a cotton picking machine, and almost all of the land is owned by the large corporations, like railroads, or oil companies, banks, causing a political reading. And so, those titles at the end describe what is seen, who owned the land, and where it was located, what small town it was near. Not only do I want to bring out the politics, but I want the viewer to recall the whole film, to play with memory.”

In the same interview he acknowledges that El Valley Centro – which deals mainly with corporate farming in California’s Central Valley; “550 miles long and 60 miles across,” it feeds a quarter of the U.S .– is more clearly and specifically political than the other two films. But he adds that he hopes its political perspective carries over into Los, which focuses on greater Los Angeles (“from the San Diego County line to Val Verde,” where Benning lives, “about 50 miles north” of Los Angeles, and moving inland from the Pacific “as much as 40 or 50 miles east”), and into Sogobi, which takes in the whole “California wilderness.” (Benning gives an ethnic inflection to each film by including a song over the final credits: Mexican pop in Spanish in El Valley Centro, country-and-western in English in Los, and a Native American chant in Sogobi, whose title is a Shoshone word meaning “earth.”) 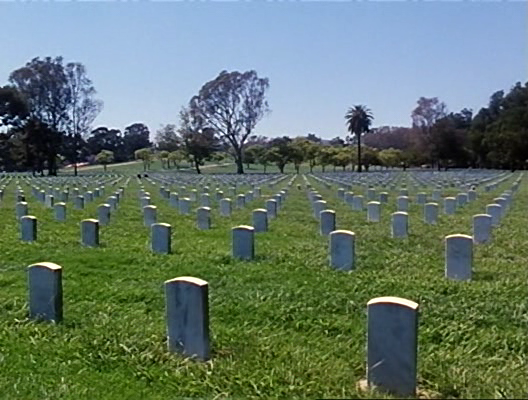 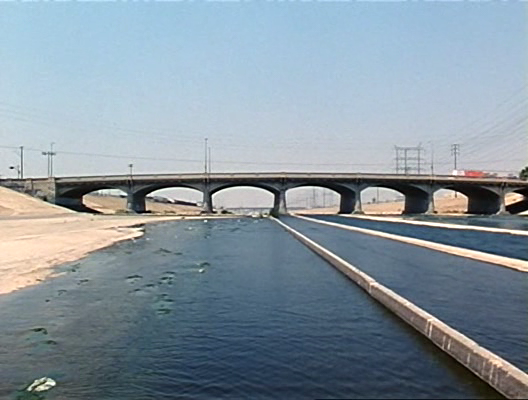 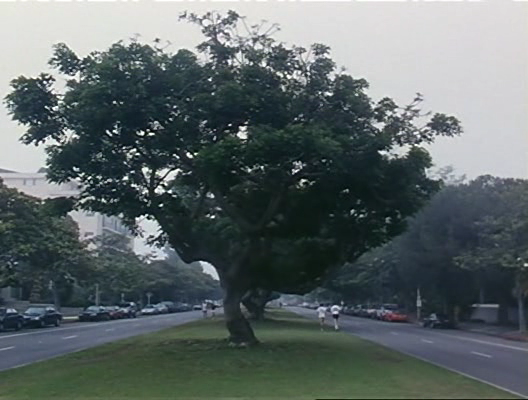 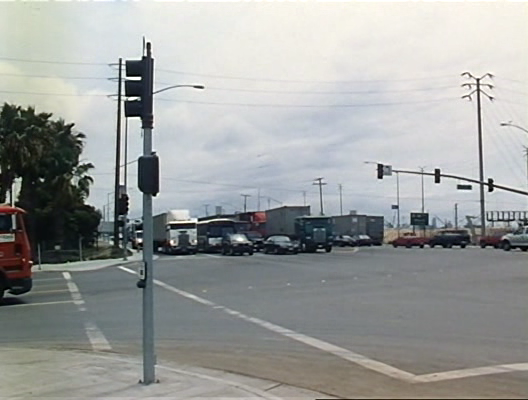 The political message isn’t sustained or even clearly articulated. Indeed, Benning’s definitions of his subjects and their owners often seem misplaced — in some cases because they’re abstract, in others because they’re simply wrong. Los – my favorite film in the trilogy, perhaps because its urban turf is more familiar than farmland or wilderness — includes the following dubious identifications: “summer rain/Golden State Freeway/ Newhall Pass,” “joggers/San Vicente Blvd./Santa Monica,” “planes landing/ Los Angeles International Airport/Los Angeles,” “soccer/Hansen Dam Park/Pacoima,” “business people/Arco Plaza/Los Angeles,” “police/Democratic National Convention/Los Angeles,” “brush fire/ Pechanga Indian Reservation/Temecula,” and “homeless/6th Street/Los Angeles.” It’s not just that summer rain isn’t exactly owned by the Golden State Freeway, or the joggers by San Vicente Boulevard, the landing planes by LAX, the soccer game by Hansen Dam Park, the businesspeople by Arco Plaza. It’s also that we can’t be sure whether Benning has pegged many of these subjects precisely or even accurately. The Newhall Pass shot is an extraordinary view of 16 to 18 busy lanes of moving traffic, most of them on the same superhighway, but the rain is strictly incidental. Making the Santa Monica joggers more important than the trees, buildings, cars, bicycles, and nonjogging pedestrians seems fairly arbitrary. Plenty of people on Arco Plaza don’t appear to be businesspeople, and lots of people on Sixth Street aren’t visibly homeless. And the Temecula brushfire shot shows us not flames but towering heaps of smoke. In other words, this is a classification system gone awry, apparently driven by an impulse to be encyclopedic, and not even Benning’s avowed hatred of Los Angeles can adequately account for it.

Furthermore, Benning wants many of his shots to be cross-referenced — so that the “burnt land/Pechanga Indian Reservation/Temecula” shot in Sogobi is recognized as the same place seen in the brushfire shot in Los – which is difficult given that he’s labeling these shots long after they appear. More troubling is his decision to order his shots mainly according to formal principles — sound, color, texture, composition –rather than thematic development or continuity. (He noted last month at the Berlin film festival, where he premiered the trilogy, that the number of possible editing combinations with 35 shots is 35 factorial, or “1 with 40 zeros”; he said he generally worked with slides made with frames taken from each shot to determine the final order. He also noted that “maybe a third of the shots were chosen for the sounds themselves rather than the image.”)

Benning’s approach to a given terrain can stimulate a great deal of philosophical or religious reflection about order and design, and in some ways his current reluctance to attach text directly to his sounds and images    – he explored its use in detail in his preceding four films — only increases this sort of reflection. It also points to a kind of art-world orientation in which interest in technique supersedes interest in meaning, especially when it comes to an audience’s comprehension.

I can’t say that Benning licked this problem when he integrated text into his work, so perhaps it’s unfair to reproach him for not doing that here. Nevertheless, it’s hard to have it both ways — to create attractive formal patterns while hoping wistfully that a political message will somehow grow out of them and develop into something meaningful or politically useful. Maybe this is because a formalist impulse and a taste for abstraction often turn out to be the same thing — a taste for shapely concepts to go with shapely sounds and images that defy reality even as they appear to make it more palatable; obviously that’s the last thing we need if we hope to acquire any lucidity about what we’re doing or attending to in the world. The efforts of the Bush administration to pound catchy but meaningless phrases into our skulls demonstrate a similar problem: what could be more formalist than “war on terrorism” or “axis of evil,” each of which furnishes us with two abstractions for the price of one? (According to the Economist, the recent departure of journalist David Frum, who coined “axis of evil,” from Bush’s speech-writing team was occasioned by his egotism in taking credit for this phrase rather than his stupidity or cynicism in dreaming it up.)

I don’t mean to say that the formal qualities of Benning’s trilogy are as consistent as the cookie-cutter form implies. Some shots clearly aspire to beauty — there are some breathtaking landscapes, especially in Sogobi – while others seem motivated more by a desire to document or bear witness, depicting such things as a waste-disposal plant or steelworkers at a construction site. There’s even a hint of this dialectic in the contrast between the banal shot of ocean waves that concludes Los and the spectacular and strikingly composed Pacific vista that opens Sogobi.

The ongoing theme that natural resources are being squandered leaves us with the feeling that, as in Disney’s Bambi, the human race is the ultimate villain. This theme is especially evident in Sogobi, where no trace of humanity is visible until the tenth shot, when a fire-fighting helicopter puts in an eerie appearance. (Other surreal images include a barren landscape of housing lots and an oil well in the midst of flowers and multicolored brush in Los, and a distant view of a cement quarry resembling the ruins of a Greek amphitheater for giants, with trucks crawling along the tiers like insects, in Sogobi. The mysterious offscreen sounds heard with the “red boulders” in Sogobi – apparently distant gunshots and the faint gurgle of running water — also create a surreal effect.)

The tension between impartially bearing witness and creating or finding meaning is evident throughout the trilogy. When a bird flies into the frame of shot number 18 in El Valley Centro (“dredge/Delta Dredging Co./The Delta”) and lights on top of a mast, it’s not clear whether this should be seen as an accidental intrusion or as an element that retroactively becomes part of Benning’s design. His filmmaking is full of vexing questions of this kind, which perhaps makes it only logical that his political agenda periodically slides in and out of focus.