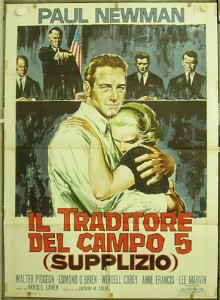 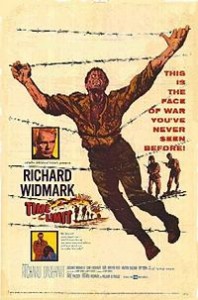 I’ve recently reseen these two taut black and white 50s melodramas about the impending courtmartials of American POWs in North Korea who broke under torture, including brainwashing, and became traitors–characters played respectively by Paul Newman and Richard Basehart, and interrogated by Wendell Corey and Edmond O’Brien in the first film, Richard Widmark in the second. Indeed, there are so many close similarities and parallels between these films and their existential issues that I’ve often mixed them up in my memory, although it’s now clear after reseeing them that Time Limit, the only film ever directed by Karl Malden, is by far the better of the two. The Rack is adapted by Stewart Stern from a 1955 TV drama by Rod Serling that aired on the United States Steel Hour; Time Limit is adapted by Henry Denkler from a 1956 play that he coauthored with Ralph Berkey.

It’s interesting to reflect in passing that the central issue of both films –- why and how a much-admired officer broke under torture and wound up cooperating with the enemy — is one that has hardly been addressed at all in the case of John McCain’s torture as a POW in North Vietnam (Alexander Cockburn’s low-profile and not readily accessible Counterpunch is, as far as I know, the only publication that’s addressed it), which has been discussed almost exclusively as an account of what McCain endured, not in terms of how the enemy benefited from the torture when he eventually decided to cooperate. It also seems significant that the propagandistic value of the torture for the North Koreans isn’t questioned or discussed in either film (or in The Manchurian Candidate, for that matter, a 1962 film clearly informed by these two predecessors), although it’s widely felt today that the propagandistic value of the torture practiced mainly by U.S. mercenaries on Iraqi citizens who have mainly proved to be innocent has been exclusively negative.

Part of what for me makes Time Limit more provocative is the extent to which it challenges the audience’s view of what heroism is, with a well-calibrated surprise ending that overturns many of our initial assumptions. (The fact that it includes a few flashbacks to North Korea, unlike The Rack, plays some part in this.) The Rack also challenges some of our assumptions, to be sure, but does so a good deal more tentatively and uncertainly. Both films are very much worth seeing, although attempting to relate them in any way to present-day issues only highlights the depressing distance we’ve traveled between then and now. To the best of my knowledge, torture as a kind of sport wasn’t a commercial standby half a century ago in the same way it is today in such films as Saw and its sequels. And neither The Rack nor Time Limit regards it or uses it as any sort of sport. [7/25/08]