In late 2002 or early 2003, I was approached by an editor at Oxford University Press about the possibility of editing a new Oxford Companion to Film. Despite some initial reluctance on my part—being rather frightened of the dimensions and demands of such a project—the editor was persistent, and eventually I signed a contract to carry out this work, after drawing up a proposal, enlisting the late Robert Tashman, a Chicago friend (and former Granta editor) to serve as line editor, and compiling several lists of entries (1099 of them covering A through L, as far as I ever got) and contributors (an ideal list of 43).  But the project fell aground after the editor who had enlisted me got downsized. A meeting of Tashman and myself with other Oxford editors in New York made it clear that they weren’t interested in following through on the project, and frankly, I wound up feeling relief about this (although I’m sorry to say that Bob was disappointed—even though both of us were able to keep our advances).

What follows are two sample entries that I wrote for this abortive project; if memory serves, both benefited from Bob’s line-editing. I haven’t updated either of them. — J.R. 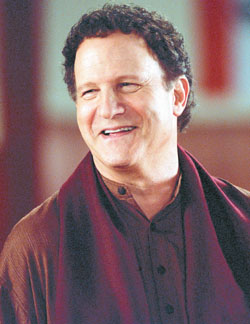 From the outset, the brilliance of this deliberately obnoxious writer-director-actor has been inextricably tied to what keeps his art alive and uncomfortable. A deconstructionist avant la lettre of show biz even in his two eccentric comedy albums and his 1975 sketches for Saturday Night Live, he virtually begins his remarkable first feature Real Life (still his funniest), an unsettling satire about the implications of the early 70s cinema-verité TV series An American Family, with a brassy version of “Something’s Gotta Give” with awkwardly improvised new lyrics, performed for the equivalent of a Rotary Club gathering in Phoenix, Arizona. And he ends his third feature, Lost in America, with Frank Sinatra’s recording of “New York, New York,” in a context so sarcastic and despairing that it converts the song’s celebration of triumph into a mockery of abject defeat.

In between these assaults is the equally trenchant but much subtler Modern Romance, which etches out a disquieting parallel between a movie editor’s professionalism in reshuffling the same material in order to polish commercial dross and his insanity in trying to apply similar obsessive principles to his love life. The latter film elicited the admiration of Stanley Kubrick, but audiences and critics were slower in getting the point.

Obliged to become more bankable and conventional in his next three pictures with the help of stars and contrived happy endings, Brooks nevertheless brought ingenuity and invention to Defending Your Life, Mother, and The Muse. He remains American cinema’s most insightful comic poet laureate of neurosis because unlike Woody Allen, his highly analytical self-criticism actually teaches us things about our culture rather than confirm and flatter our forms of paralysis-—-implying that his happy endings are earned even when they aren’t fully convincing. And his use of neutral and anonymous settings in all these films, apart from the theme-park fancies of his southern California purgatory in Defending Your Life, actually conveys a feeling for the blandness of American topography that few other filmmakers have captured.

Meanwhile, as an actor in other people’s movies, his two most memorable portraits are show-biz neurotics in films by his friend and namesake James L. Brooks—–Broadcast News and I’ll Do Anything (matching dissections of two company towns, Washington and Hollywood). Tragically, all three of his musical numbers in the latter film-—-including his dance of alienation to Julie Kavner’s lament in a chic restaurant, the greatest single achievement in James L. Brooks’ movie career to date–—were cut after test-marketing previews, suggesting that the self-destructive neurosis of his writer-director-producer was even more consequential than that of the cynical producer Albert Brooks was playing, a devastating lampoon of Joel Silver.

A French term that literally means “cutting up,” découpage has related meanings in relation to film, and refers primarily to the technical breakdown of shots and sequences that both precedes filming (in the form of a script designed for the production crew) and follows it (in the form of a CUTTING CONTINUITY that describes the finished film). As generally used, the term can refer either to the complete form and/or the structure of a film and the way that this is represented in script or storyboard form, either as a plan or as a description of the finished work. Another way of defining the same term would be to view it as a combination of MISE EN SCENE (especially camera placements and movements) and EDITING or MONTAGE —–a kind of formal skeleton of the film as a whole that can be employed either as a preproduction blueprint or as a postproduction description.

It has been argued by film theorist NOEL BURCH that one reason why this term exists in French but not in English is the assumption that a filmmaker always maintains control of the form of a film from its first conception to its final state. In France, this assumption is protected by law (see DROITS D’AUTEURS), but in the studio system outside France, the breakdown of labor between script, direction, and editing most often makes this goal unachievable. See Noël Burch, Theory of Film Practice (first chapter, 2nd. Ed., Princeton University Press, 1981).