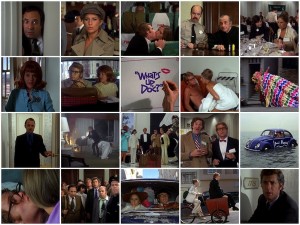 Peter Bogdanovich’s bright 1972 screwball comedy, patterned after Bringing Up Baby and decked out with lots of references to silent slapstick, plants dim musicologist Ryan O’Neal and freewheeling kook Barbra Streisand in San Francisco and then piles on the comic complications, with assistance from Madeline Kahn, Austin Pendleton, John Hillerman, Randy Quaid, and Kenneth Mars. Much of the slapstick is deftly executed, but there is one unfortunate undertone — ordinary, unassuming workers tend to be the fall guys more often than the pompous rich (a factor that distinguishes this comedy from most of Bogdanovich’s classic sources), although O’Neal’s character, who stays at the Hilton, certainly has his share of pratfalls. Streisand sings a fabulous version of “You’re the Top” behind the credits, and the busy script by Buck Henry, Robert Benton, and David Newman keeps things moving, but the spirit of pastiche keeps this romp from truly rivaling its sources. G, 94 min. (JR) 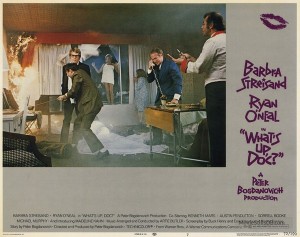