Review of ABBAS KIAROSTAMI AND FILM-PHILOSOPHY 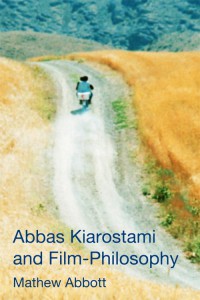 It isn’t only the hefty price that makes this volume look forbidding to most readers of this magazine. However inviting it might seem to regard the features of Abbas Kiarostami as genuine works of philosophy—not merely as philosophical statements but as brazen acts that challenge viewers into making them rethink and reformulate many of their assumptions about both life and cinema—the academic etiquette of tracing this concept through a labyrinth of other philosophers and other Kiarostami critics may often prove to be less user-friendly to the lay reader.  And it must be admitted that for readers more accustomed to journalistic paraphrase than to the rigours of scholarly hair-splitting and jargony word-spinning, a bumpy ride is in store. Mathew Abbott’s Introduction pivots on page 4 from Kiarostami to Stanley Cavell, but by this time the author has already had recourse to the philosophy of Jean-Luc Nancy on the previous page, and he will be chasing after Wittgenstein, Heidegger, and Descartes soon afterwards

Even so, this book is after much bigger game than a daunting bibliography. Over the same opening pages, Abbott states, ‘This book uses philosophy and the films of Kiarostami for their mutual illumination, turning to the Iranian director in an attempt at finding and clarifying a form of cinematic thinking,’ and later goes on to assert that “Cinematic thinking is a specific kind of thinking (and it really is thinking).’ Perhaps even more to the point, Kiarostami’s relation to philosophers has many practical ramifications worth exploring in some detail: ‘For Cavell, we go to the movies to experience a reconnection to the world, a connection we feel has been severed in modernity.’ And Abbott hastens to clarify that ‘Kiarostami’s films do not really present a “systematic vision of the world”’; indeed, ‘ it wants to get us reflecting on our very desire for an overarching vision (and, one might say, get us looking instead). I will not be trying to unearth a robust philosophy from Kiarostami’s films as a whole or any of his films in particular; instead I want to think with his films about the practice of philosophising itself, about what it can and can’t achieve.’

What fascinates Abbott most is the way the controversial video epilogue of Taste of Cherry, which reveals the characters as actors and refuses to provide narrative closure, doesn’t deflate or pull us away from the film’s previous concerns but actually intensifies them: ‘We wake bewildered, but with fresh eyes. There is something affirmative about Kiarostami’s gesture, which is especially pronounced given the film’s grim plot.’ This contradicts the assertion of some other critics that Kiarostami weakens his narratives with such departures, but it frankly comes closer to my own experience. And Abbott chooses to focus on the last seven features of Kiarostami’s career (including Five, which dispenses with characters and narrative in any conventional sense) to chart comparable disengagements and re-engagements in Kiarostami’s encounters with the world. In fact, he could have started much earlier in Kiarostami’s oeuvre to follow the same concerns. The Traveler (1974), for example, gave us a small-town boy who makes the money to get to a football match in Tehran by pretending to photograph his schoolmates with an empty camera, and he winds up sleeping through the climactic match anyway. And unlike the mainstream critics who only started to take Kiarostami seriously after he began casting non-Iranian actors (most notably, Juliette Binoche), Abbott can’t be accused of ignoring Kiarostami’s non-commercial and state-supported roots. But sticking to all the longer films from The Wind Will Carry Us through Like Someone in Love does allow us to see the continuity and consistency of Kiarostami’s approach even while he continued to develop and experiment in unforeseeable ways. The tragedy of his early death only confirms this.