Seven Views of Water under the Warsaw Bridge 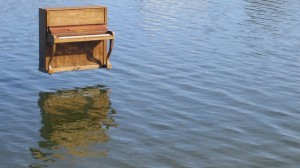 1. Written in 2007 for Sight and Sound’s annual “five best” poll: “The beautiful and exciting fifth feature of Catalan filmmaker Pere Portabella — the onetime coproducer of Viridiana who forged a memorable kind of clandestine experimental cinema under Franco with Vampir Cuadecuc (1970) and Umbracle (1972) — was made in 1989. But thanks to the overall scarcity of his work, I only caught up with it this year, at the first North American Portabella retrospective, held in Chicago in November. His work as a whole has been preoccupied with issues of continuity in almost every sense of that term — historical, political, thematic, narrative, poetic, musical, pictorial, sonic, stylistic, formal. And now that mainstream cinema has replaced Franco as the power to be subverted, continuities of narrative and those between sound and image are the principal orthodoxies to be played with.“ 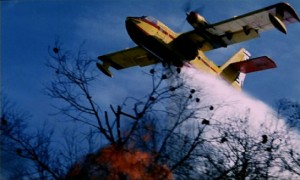 2. In between its opening shot (rain falling on pavement) and its final shot (a plane spraying artificial rain –- actually a torrential downpour—on what remains of a burnt forest), Warsaw Bridge is concerned with both flow and contact, movement and collision, agitation and stasis. What might be said to flow and move, apart from water, is different kinds of narrative and different forms of information. And how we pass from one zone to another – what might be called the bridge permitting our passage from one thing to another, occasioning collisions and/or transformations en route — proves to be even more ambiguous than what distinguishes fiction from non-fiction. Sometimes it’s a matter of theme or topic, sometimes a matter of form or style bridging two or three forms of art (such as architecture, music, and literature, in the film’s opening stretches) or two or three social classes, or juxtaposing a woman who lectures on marine biology with her husband (a conductor) and/or her lover (a novelist). And getting from here to there via a bridge is what the film is about and/or its major form of play (pick one, or both). 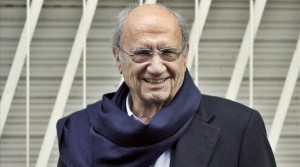 3. “To conceive a film, I always need to place myself in front of a blank sheet. It is the shortest road to the blank and empty screen, with the best conditions. In a way, it is like working directly on the screen itself.
“It is simply a matter of letting a situation, a fortuitous event, a starting point, fall onto the blank page, black on white – a stain. A center around which the story is then woven.” (Pere Portabella, introducing his own web site, pereportabella.com.) 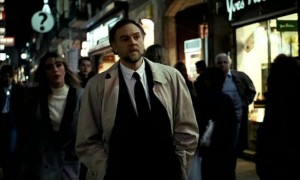 4. “Pont de Varsòvia is dated 1989, the year of the fall of the Berlin Wall. If the predominant look in Nocturno 29 was that of the upper classes in the sixties, in Pont de Varsòvia we have shining images of the new intellectuals and the amnesiac, progressive, European political classes. But beneath that sparking surface of spectacular socio-cultural events and the frivolous life in a happy Europe, lies the tension of broken memories and personal and historical cataclysms. Filmed as meticulously as contemporary commercial cinema, Pont de Varsòvia shatters the plot into a thousand fragments in a European landscape broken by the return of History. It is therefore not strange that two years later Godard should be the author of a sibling film, Germany Year 90 Nine Zero, explicitly the heir to Rossellini’s Germany year zero in 1947 post-war Europe.” (Unattributed description of Warsaw Bridge on Portabella’s web site.) 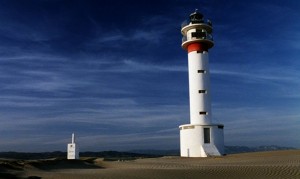 5. “Portabella’s avowed method of composing the script of Warsaw Bridge— ‘taking a short article from a newspaper about the body of a diver found in a burnt forest’ and then expanding ‘in all directions’ from there — suggests a Surrealist procedure comparable to that of ‘Data Towards the Irrational Enlargement of a Film: Shanghai Gesture,’ with the pertinent distinction that in this case, the game involves an enlargement/expansion based on establishing continuities of characters, locations, themes (such as the crossing of class boundaries involving culture during a verbal chess match in a kitchen, a brief discussion of verse forms at an adjacent party, and an opera staged in a fish market), stray motifs (such as ‘Constantinople’ and algae), visual patterns (such as cutting from adjacent buildings to a row of ties, or from one airplane to another airplane), and camera movements, all of which ultimately supersede conventional narrative continuities.” 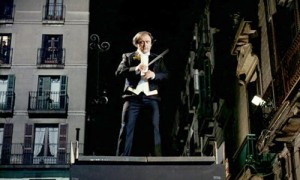 “[There] is a continuity between Portabella’s separate works that…rewards close scrutiny — not just the way, for instance, that most of them occupy some netherworld between fiction and non-fiction, but also the way that Francisco Franco and his own forms of fiction and narrative link Nocturno 29, the Miró shorts of 1969, Vampir Cuadacuc, Umbracle, El Sopar and the opening sequence of Informe general, while other forms of narrative dominance relating to Hollywood and other western models of continuity, including the Common Market, seem to figure more prominently afterwards. Clearly Portabella’s second career as senator, starting in 1977, which included his participation in writing the new Spanish Constitution, helping to abolish the death penalty, and assisting Spain’s entry into the Common Market, has redirected the focus of his filmmaking, even though the larger and the smaller concerns of continuity between the two parts of his career have been more lasting.” (Two excerpts from my “Portabella and Continuity,” an essay commissioned by Portabella in 2009 when he was planning to include some written materials in a DVD box set of his complete works, a set that he eventually released four years later without any written material.) 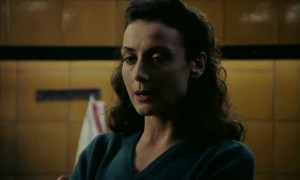 6. As far as I can tell, there’s no physical bridge in Warsaw Bridge and no Warsaw. What, then, accounts for this title?
According to a Cuban friend of mine with Catalan parents, .Poland tends to function as a generic foreign country vis-à-vis Spanish fantasy, in both Pont de Varsòvia and Calderón’s La vida es sueño (Life is a Dream) -– the site of fairy tales and semi-imaginary kingdoms. 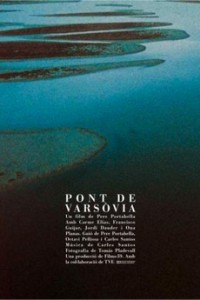 7. At the center of Warsaw Bridge stands (or sits or lies) a romantic triangle: a prizewinning novelist, a classical conductor, and a university marine-biology lecturer, but the narrative crisscrosses more than follows them. In between it offers meditations on Spanish architecture and landscapes; an outdoor concert whose conductor is on an elevated platform in a shopping arcade and the musicians are on balconies, following the conductor on TV screens; a lavish state party thrown for the novelist; a verbal chess match at the party; a credit sequence twenty-odd minutes into the film; another concert inside a cathedral; extended lovemaking; a recitation of part of the novelist’s book; an opera performed at a gigantic fish market; a lecture on algae; another opera set (but not staged) in a Turkish bath; a TV interview; a meal prepared and eaten by the married couple and the wife’s lover; a film screening; and a plane trying to extinguish a forest fire. Some of the dialogue and action segues into non sequiturs and nonsense. The images of operas and at least one of the concerts move gracefully in and out of sync with the music, and the opera in the fish market includes some spectacular bits with sharks and blocks of ice. 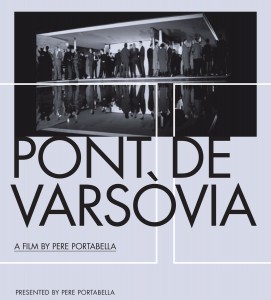 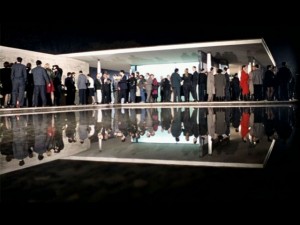 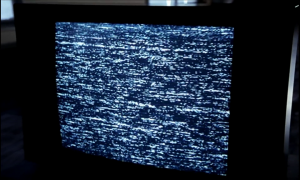