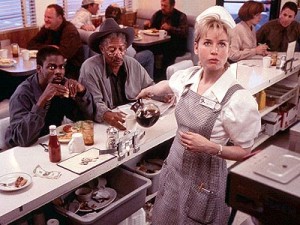 It isn’t surprising that John C. Richards and James Flamberg won the prize for best screenplay at the 2000 Cannes film festival; this offbeat and unpredictable comedy-thriller throws so many curveballs, one right after another, that I doubt I’ve had more fun at an American movie this year. You should know as little in advance about the plot as possible, so let’s just say that the title heroine (Renee Zellweger), a poorly treated housewife in a small town in Kansas who’s addicted to a daytime soap and smitten with one of its main characters (Greg Kinnear), drives out west to find him, with a couple of bickering hit men on her tail. The latter are played by Morgan Freeman and Chris Rock — who may be the most exciting tragicomic duo to come along since Martin and Lewis and at the very least deserve a sitcom or comic strip detailing their further exploits. There’s a lot going on in this movie about fantasy fulfillment and folie a deux in general, and one of the most remarkable things about it is that it was directed by Neil LaBute, the writer-director of the highly misanthropic In the Company of Men and Your Friends & Neighbors; this starts out with a similarly nasty edge and then turns warmer, funnier, and perhaps even wiser by the minute. The lovely ‘Scope cinematography is by Jean Yves Escoffier, who shot the first three features of Leos Carax (including Boy Meets Girl, which is showing this week at the Music Box). With LaBute regular Aaron Eckhart, Crispin Glover, Pruitt Taylor Vince, and Tia Texada. 112 min. Bloomingdale Court, Bricktown Square, Burnham Plaza, Chatham 14, Esquire, Ford City, Gardens, Lake, Lawndale, Marcus Addison, Norridge, Pipers Alley, Quarry, Randhurst, Renaissance Place, Rice Lake, 62nd & Western, Streamwood, Woodfield. –Jonathan Rosenbaum