Review of WE’LL ALWAYS HAVE CASABLANCA 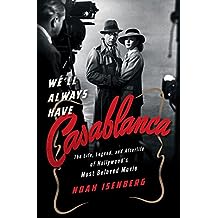 The Life, Legend, and Afterlife of Hollywood’s Most Beloved Movie

I’ve never been asked to select my favourite ‘guilty pleasures’ in movies, but I suspect that if I were, Gone With the Wind and Casablanca — two highly accomplished and engrossing pieces of dubious Hollywood hokum — could easily head the list. Yet it’s one of the signal virtues of Noah Isenberg’s We’ll Always Have Casablanca to suggest that the true sources of Casablanca’s popularity place it well beyond the racial and racist subtexts of Gone With the Wind.

In the case of the latter film, we have the benefit of Molly Haskell’s Frankly, My Dear (2009), a superb critical and ideological unpacking of both the Margaret Mitchell novel and the David O. Selznick blockbuster. Isenberg, an academic and a scholar more than a critic — director of screen studies and professor of culture and media at New York’s New School, and best known among cinephiles as an Edgar G. Ulmer specialist — hasn’t given us the same sort of book as Haskell, although he’s produced a volume that’s equally accessible and nearly as valuable in explaining the appeal of a popular classic. 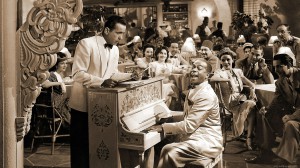 An even more pertinent cross-reference to what I find most rewarding in this book is Alexander Nemerov’s Icons of Grief: Val Lewton’s Home Front Pictures (2005), which persuasively shows how the very souls of Lewton’s RKO quickies are expressed and can be felt less in their main characters than in their bit players — Darby Jones as the title zombie in I Walked with a Zombie, Glen Vernon as The Gilded Boy in Bedlam.  Without mentioning Lewton, Isenberg adroitly conveys how much the soul of Casablanca, in communion with the souls of the film’s fans, belongs not to Humphrey Bogart and to Ingrid Bergman but to secondary members of the cast, mostly Eastern European, such as Paul Henreid, Dooley Wilson, Conrad Veidt, Peter Lorre, S.Z. Sakall, Madeleine Lebeau, and Leonid Kinskey — all directed by a Hungarian, Michael Curtiz, who struggled with English himself. As a columnist for Aufbau, a German-language émigré newspaper put it in the early 40s, ‘ it’s a grotesque, almost freakish situation; Hitler’s gangsters, trying to annihilate all these [European-born émigré] actors finally succeeded to weld them to an almost perfect ensemble and give them the chance of their lives, artistically as well as financially.’

Isenberg goes on to say, ‘Nearly all of the some seventy-five actors and actresses cast in Casablanca were immigrants. Among the fourteen who earned a screen credit, only three were born in the United States: Humphrey Bogart, Dooley Wilson, and Joy Page, Jack Warner’s stepdaughter, who plays the Bulgarian refugee Annina Brandel. At the studio, Stage 8, where Rick’s Café was assembled, was known as International House….Hailing from more than thirty different nations, the majority of refugee actors in the film served merely as day players, performing small parts—generally either as Nazis or as refugees fleeing the Nazis—most without significant dialogue. Among them, however, were many distinguished European artists with illustrious pasts on stage and screen.’ 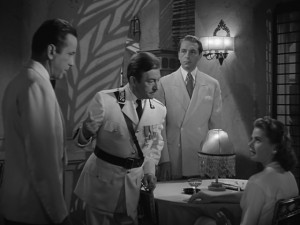 All this helps to explain why the movie’s emotional peak — the climax of a steady build in political force, from the moment that Rick, shedding his neutrality, allows a young Bulgarian to win at roulette, thus allowing him and his wife to afford exit visas—is the playing and singing of the ‘Marseillaise’ to overcome the Nazis’ rendition of ‘Die Wacht am Rhein’. This is ordered by Laszlo (Henreid) with what Isenberg rightly calls ‘a torrent of urgency, echoing Rick’s earlier demand that Sam play ‘As Time Goes By’”.

There have been many other books about Casablanca, and not having read any of them, I can’t provide any useful comparisons. But I can log a couple of minor complaints: nowhere in the book can one find an exhaustive list of Casablanca’s credits, which would have been very helpful, and Isenberg seems unaware of the late Robert Sklar’s City Boys, which makes a convincing case for Humphrey Bogart’s Rick being a former Communist. But otherwise, he seems to have covered all the bases. He knows why and how the rumors about Ronald Reagan or George Raft almost landing Bogart’s part are false, and he’s especially good on the rocky career and tribulations of Murray Burnett, coauthor of the unproduced 1940 play Everybody Comes to Rick’s, inspired by his own visit to Europe two years earlier, that furnished Casablanca with its atmosphere, settings, and most of its characters. He understands the importance and brilliance of Umberto Eco’s 1984 essay, ‘Casablanca: Cult Movies and Intertextual Collage,’ including its identification of ‘some two dozen [mythical] archetypes [in] in the film,’ and is alert to such unlikely spinoffs as a Chinese musical adaptation blending ballet, opera, and musical theater (2005) and a glitzy Japanese musical version performed by an all-female cast, the Takarazuka Revue, a few years later—not to mention earlier appropriations by the Marx Brothers and Woody Allen.  You might say that this Casablanca compendium’s a keeper. 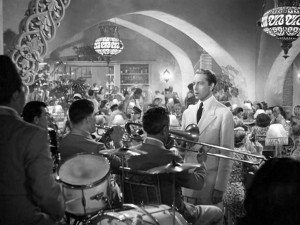