Review of WILLIAM FAULKNER AT TWENTIETH CENTURY-FOX: The Annotated Screenplays 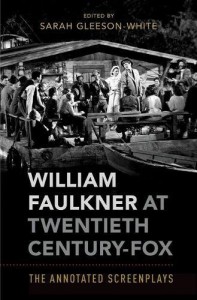 We know that Faulkner was no cinephile, but it’s less known that he referenced Eisenstein in The Wild Palms and cited Citizen Kane and The Magnificent Ambersons as two of his favourite films (along with High Noon) in a 1958 interview. One also can’t read the present-tense opening of Light in August without noting its cinematic immediacy, which suggests that consciously or not, Faulkner learned a lot from the movies.

Yet when it comes to his screenwriting, it’s closer to alienated, assembly -line labour than any significant form of self-expression. Editor Sarah Gleeson-White, a Sydney-based literary scholar, is well aware of this problem, beginning her Introduction with contradictory statements from Faulkner about how seriously he took this work (both of which, unsurprisingly, sound perfectly sincere) while noting that he wrote around fifty Hollywood screenplays between 1932 and 1954. That Faulkner was fully capable of working simultaneously on both his novel Absalom, Absalom and Hawks’ The Road to Glory is also duly noted. But Gleeson-White’s ambivalence about what actually constitutes screen authorship is reflected in the fact that several photographs in her commentaries are devoted to Faulkner’s Fox collaborators and none at all to Faulkner himself. And most of these commentaries are devoted to distinctions between successive script drafts, less between any of these drafts and the finished films.

Even in Faulkner’s work for Howard Hawks and John Ford — including four of the six scripts gathered here, all co-written by others, only one of which (Hawks’ 1936 The Road to Glory) assigned Faulkner a screen credit–one feels that the most relevant auteur often turns out to be Darryl F. Zanuck. This is clearly true of The Road to Glory, where the assignment was to find ways to incorporate stock battle footage from Raymond Bernard’s 1932 Les croix des bois while further developing a love triangle that was added to the plot at Zanuck’s request well before Joel Sayre and then Faulkner were brought onto the project. (The other Hawks script here, The Left Hand of God, was eventually directed by Edward Dmytryk and credited to Alfred Hayes.)

Hawks was a good friend, responsible for first bringing Faulkner to Hollywood, having already been a fan of his work ever since his first novel, and using him initially as a World War 1 specialist. (Both men were doom-ridden romantic fatalists deeply marked by that war, even though neither one saw overseas combat.) By contrast, as Gleason-White points out, there is reason to doubt whether Faulkner ever met Ford, for whom he coscripted the 1938 potboiler Submarine Patrol as well as Ford’s first Technicolor feature, Drums Across the Mohawk, in 1939. (As with The Road to Glory, there are some thematic parallels in the latter film with Faulkner’s fiction, but not especially illuminating ones.)

The other screenplays here are for John Cromwell’s 1936 Banjo on My Knee and Tay Garnett’s 1937 Slave Ship. All six scripts, annotations and all, are useful things to have, even if they aren’t much fun to read and ultimately teach us more about Hollywood than they do about Faulkner. What he contributed to them was probably helpful, but other hacks could have done the same.